B2B Services, EdTech and IT Product Cos witness return of interest even as overall Venture Capital investments dip 32% in Jan-Mar'16

By Arun April 04, 2016
Venture Capital firms invested $242 million over 85 deals in India during the three months ending Mar 2016, data from the Venture Intelligence VC Deals Database shows. The investment activity by volume during Q1’16 is 32% lower compared to the same period in 2015 (which had witnessed 125 investments worth $471 million). The activity level was also 13% lower to the immediate previous quarter (which had witnessed 98 deals worth $347 million).

Note: As VC type investments cap out at $20 million per round under Venture Intelligence definitions, follow on investments raised by companies like BigBasket, CarTrade, ShopClues, Byju’s Classes, etc. are not included in this report. 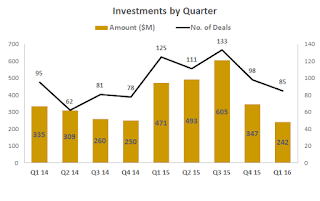 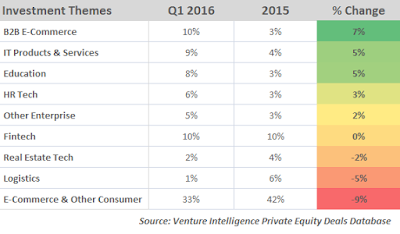 ET-Now's coverage of the quarterly trend: 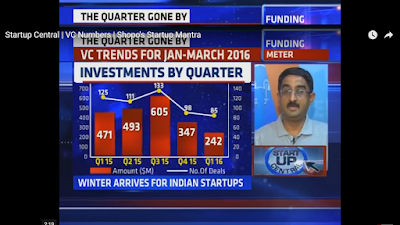 Comments? Join the Discussion on LinkedIn.

Venture Intelligence is India's longest serving provider of data and analysis on Private Company Financials, Transactions (private equity, venture capital and M&A) & their Valuations in India. Click Here to Sign Up for the FREE Weekly Edition of the Deal Digest: India's First & Most Exhaustive Transactions Newsletter.