By Arun October 15, 2015
Early Stage investments cross $1-B mark for first time; Internet & Mobile Cos continue to rule the roost

In just the first nine months of 2015, Venture Capital investments in India – at 323 deals worth $1,438 million - have crossed the previous historical high of 2014 (which had witnessed 304 investments worth $1,170 million across the entire year), according to data from Venture Intelligence , a research service focused on private company financials, transactions and their valuations. (Venture Intelligence classifies Venture Capital as first to fourth round of investments of not more than $20 million each by financial investors into companies not more than 10 years old.)

Venture Capital firms invested $536 million over 111 deals in India during the three months ending September 2015 – again record figures for a single quarter, the Venture Intelligence analysis showed. The investment activity during Q3’15 was 41% higher compared to the same period in 2014 (which had witnessed 79 investments worth $264 million). The activity level was 9% higher to the immediate previous quarter (which had witnessed 102 deals worth $473 million).

The main action was concentrated in the Early Stage investment segment (Seed, First and Second Round investments in companies not more than 5 years old) which, for the first time ever, has attracted over $1 billion in investments in 2015 ($1,018 million across 266 investments in the first nine months) – compared to the previous high of $553 million (across 167 transactions) in 2011 (full year).

The overwhelming attraction of Information Technology and IT-Enabled Services (IT & ITES) companies – especially Internet & Mobile firms -  to Venture Capitalists continued in Q3’15 with the industry accounting for 79 investment worth $376 million (71% of the VC investments in volume terms and 70% in value terms).

Within IT, the larger investments by size reported during Q3’15 included Tiger Global’s $20 million fresh investment in mobile-based news service News in Shorts and a similar amount attracted by engineering services BPO Allygrow in a round led by Zodius Capital.  Tiger Global also participated in two $15 million rounds during Q3’15 – for online hotel and hostel aggregator Zostel (along with Orios Ventures and others) and online shopping recommendations platform Relevant E-Solutions. 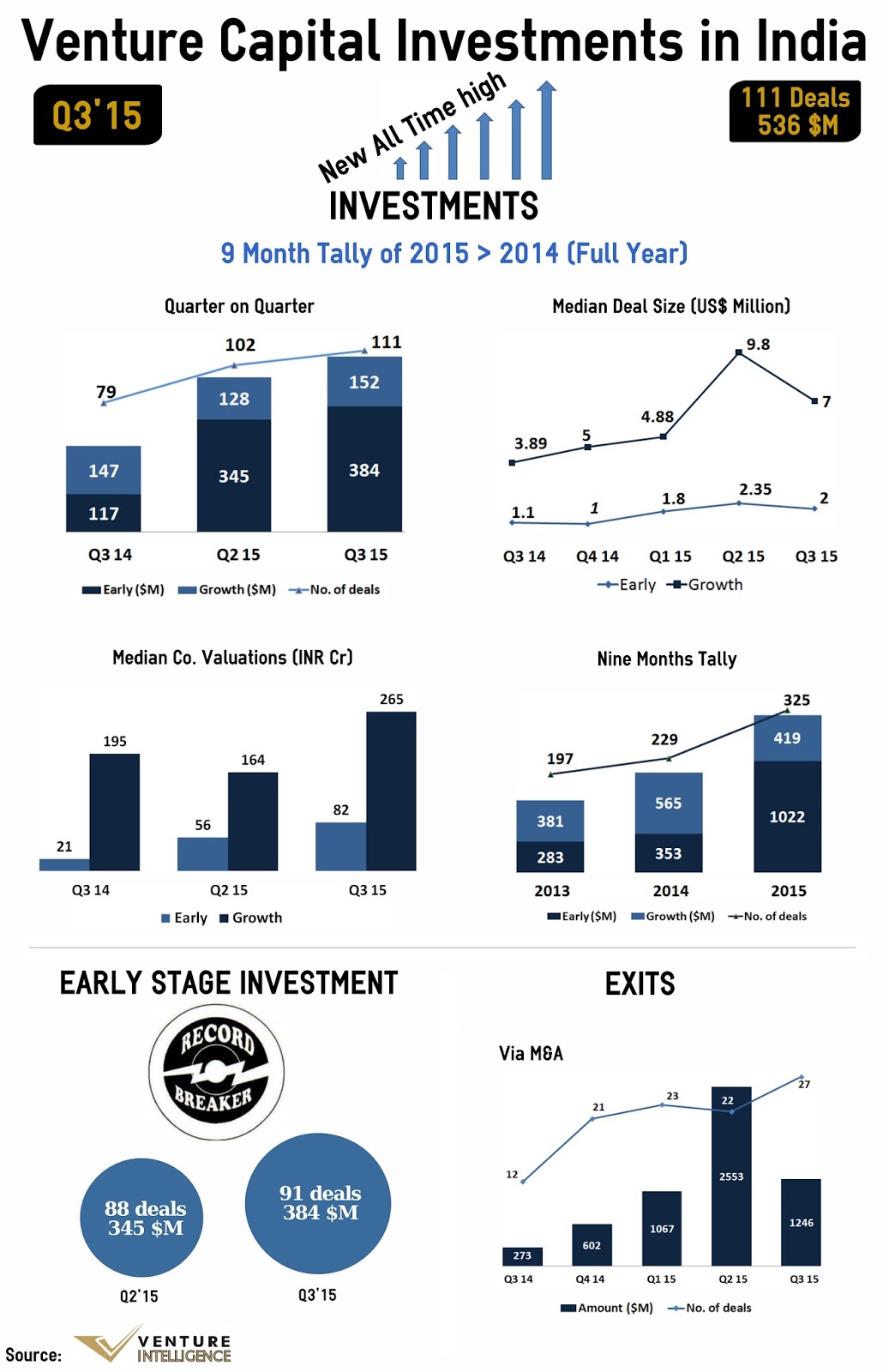