By VarathaVC November 14, 2017
With global investors such as Tiger Global and SoftBank vacating the sub-$100 million Late Stage Technology segment - that they were aggressively active during 2014-15 - the Indian Venture Capital ecosystem clearly needs to fill this yawning gap.

In the absence of new funds being raised specifically for this segment, one potential way is for Private Equity firms to "come down" from their typical sweet spot (in terms of both deal values and level of company maturity). The "old India hands" in the PE segment like Warburg Pincus and Temasek have indeed started to dabble in Late Stage Tech investing in the last couple of years. Between them, these firms have invested into companies like Rivigo, Capillary Technologies, CarTrade.com and Manthan Systems. However, given their mandate to invest across multiple sectors, these firms cannot overexpose themselves to just one sector.

The other option is for some of the Early Stage technology investors to “go up” the deal value chain. IDG Ventures India, co-founded by Sudhir Sethi and T.C. Meenakshi Sundaram (who have successfully supported startups in India from the 2000-era - when they had represented Silicon Valley VC firm Walden International), is leading the way on this front. IDG's recent investment in Policybazaar.com, where it co-led the online insurance pioneer's $79 million round (alongside global asset manager Wellington Management and home grown PE firm True North), is a good example of the firm’s Late Stage Tech focus. The firm expects to make at least one or two Late Stage Tech investments each year. 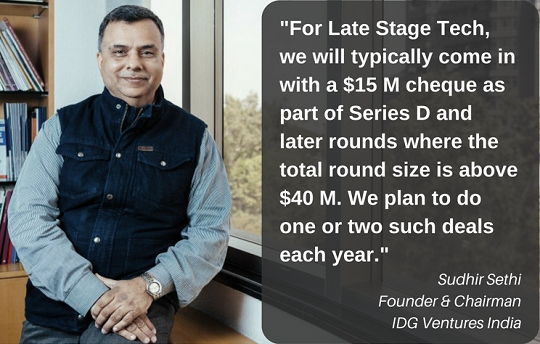 "While retaining our core Early Stage focus, IDG Ventures India started investing about 25% of our Fund II in Late Stage tech companies and this strategy continues in Fund III now," says Sudhir Sethi, IDG Venture India’s Founder & Chairman. The firm had raised its $150 million first fund in 2006, from which it had successfully invested into startups like Myntra (acquired by Flipkart in 2014) and Manthan Systems (exited via Secondary Sale). IDG Ventures India now manages $465 million across four funds. "For Late Stage tech, we will typically come in with a $15 million cheque (which can go up to $30 million) as part of Series D and later rounds where the total round size is above $40 million," Sudhir says. The firm's experience in scaling technology companies has prompted Late Stage Tech investees to invite IDG's representatives onto their board - despite its relatively lower stake holding (compared to when it makes a traditional Early Stage investment). 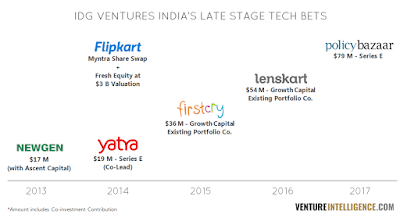 IDG's Late Stage Tech bets are aimed at fetching exits with time frames of 3-4 years. Some of firm’s 2013-14 Late Stage investments have started to produce good exits. In 2016, IDG successfully steered online travel firm Yatra.com to an Nasdaq listing (via a $92 million reverse merger) - after leading a $19 million fifth round in 2014 and a follow-on investment the next year. IDG is also set to reap significant gains from the additional capital it invested in Flipkart in 2014 - on top of swapping its shares in Myntra - which it is now exiting to new investor SoftBank. (The E-Commerce leader was valued at $3 billion in 2014 and is now valued - as part of the latest investment by SoftBank and others - at over $11 billion.) 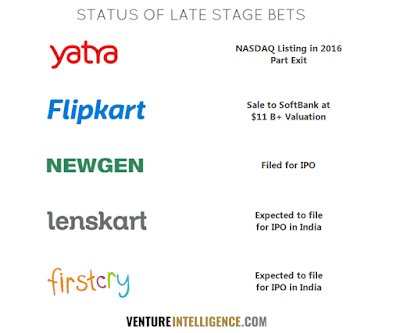 In Dec-13, IDG (alongside Ascent Capital) had invested INR 100 Cr (about $17 million then) in Newgen Software Technologies. The Delhi-based workflow & document management software company has now filed for an IPO. Two of IDG’s vertical e-commerce bets - the eyewear focused Lenskart and baby products e-tailer FirstCry - are aiming to file for IPOs in India soon.

Recent months have witnessed Infosys Co-founder Nandan Nilekani announce a $100 million fund to focus on growth stage technology start-ups. The UC-RNT Fund, a joint venture between the University of California endowment and former Tata Sons Chairman Ratan Tata - who is also an advisor to IDG Ventures India - has contributed over $41 million to cab aggregator Ola's latest round.

With IDG and such well respected Ultra-HNIs showing the way, it looks like fast growth startups that Early Stage investors have been churning out in recent years, will not suffer for the "last mile" capital they need to become self sustaining and publicly traded companies.