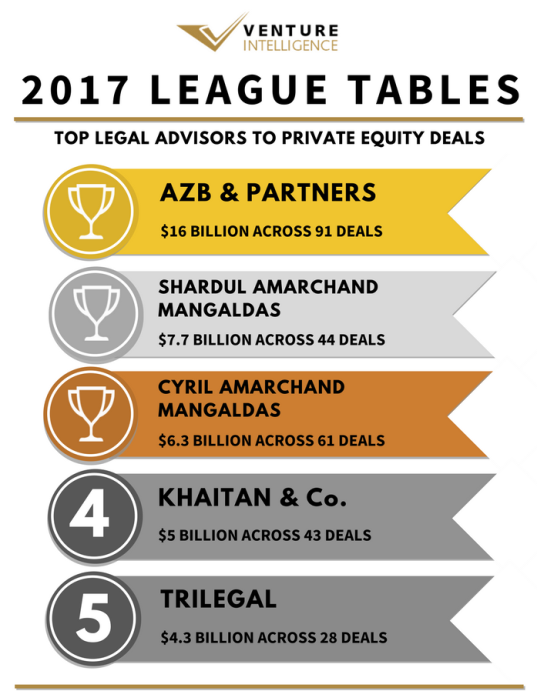 AZB & Partners topped the Venture Intelligence League Table for Legal Advisor to Private Equity Transactions in 2017. AZB advised PE deals worth $16 Billion (across 91 qualifying deals) during the period. Shardul Amarchand Mangaldas ($7.7 Billion across 44 deals) and Cyril Amarchand Mangaldas ($6.3 Billion across 61 deals) followed next. Khaitan & Co. ($5 Billion across 43 deals) and Trilegal ($4.3 Billion across 28 deals) completed the top five in 2017.
The Venture Intelligence League Tables, the first such initiative exclusively tracking transactions involving India-based companies, are based on value of PE and M&A transactions advised by Transaction and Legal Advisory firms.
AZB advised deals include SoftBank’s $3.9 Billion investment in Flipkart and Paytm. Transactions advised by SAM included the $1.4 Billion investment in Paytm by SoftBank and the $1.4 Billion investment by GIC in DLF Cyber City. Transactions advised by CAM included the $1.4 Billion investment in Flipkart by Tencent, Microsoft and eBay and $500 million investment by Canadian Pension Plan Investment Board (CPPIB) in Indospace Core logistics platform.
AZB topped the tables in terms of deal volume as well with CAM coming in second. SAM and Khaitan & Co. followed next. With 31 deals, Indus Law completed the top 5. Two  young firms - Vertices Partners and Spice Route Legal - have registered spots in the top 10.

Among PE transactions in IT & ITeS (by value), AZB, Khaitan & Co. and SAM formed the top three with CAM and Trilegal accounting for the fourth and fifth slots respectively. By deal volume, SAM and IndusLaw were tied at first place with 20 deals each. CAM and AZB occupied the third and fourth place followed by K Law with 15 deals.

In Financial Services, the toppers remained the same as in the composite table - AZB, SAM and CAM. By deal volume, after AZB, CAM and Khaitan & Co., Vertices Partners came in at fourth spot with 8 deals worth $78 million, followed by Trilegal.

AZB topped in Infrastructure deals with $2.2 Billion, followed by SAM and Trilegal. CAM came in fourth followed by S&R Associates in fifth place.

AZB also topped in Healthcare & Lifesciences, followed by J Sagar Associates in second place, DSK Legal and IndusLaw in third place. Nishith Desai and ALMT Legal came next advising deals worth $200 million each. By deal volume, along with AZB and IndusLaw, ARA Law topped advising 5 deals each. JSA, Trilegal, CAM and DSK Legal came in next with 4 deals each.

The full league table can be viewed online at http://www.ventureintelligence.com/leagues.php

To showcase your firms' transactions in the League Tables, mail Varatha at research@ventureintelligence.com 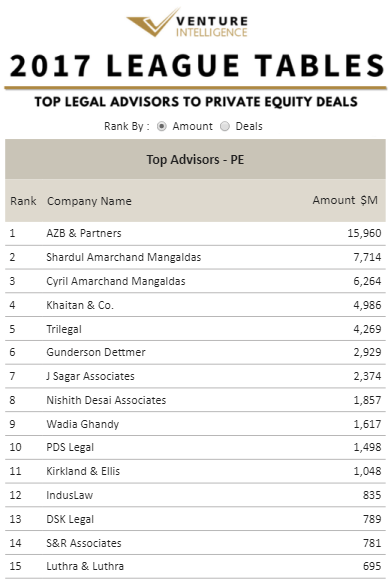 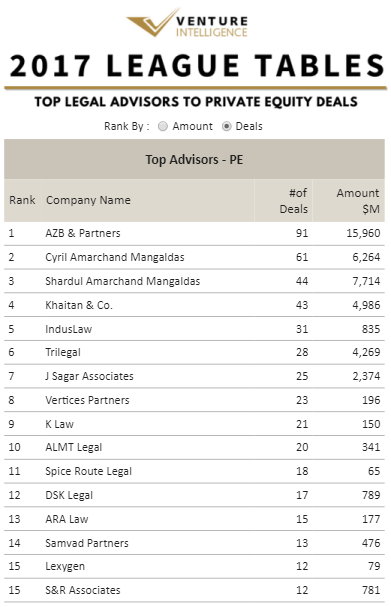