Private Equity (PE) investments in India rose to their highest ever figure of $33.1 billion in 2018 (across 720 transactions), according to data from Venture Intelligence (http://www.ventureintelligence.com), a research service focused on private company financials, transactions and their valuations. While PE investments have already surpassed the previous high - $24.3 Billion across 734 deals in 2017 - in the first nine months of 2018, the mega investments in Consumer Internet & Mobile startups such as Swiggy and Byjus towards the year-end, helped the 2018 total vault by 36% year-on-year. (Note: These figures include Venture Capital investments, but exclude PE investments in Real Estate.) 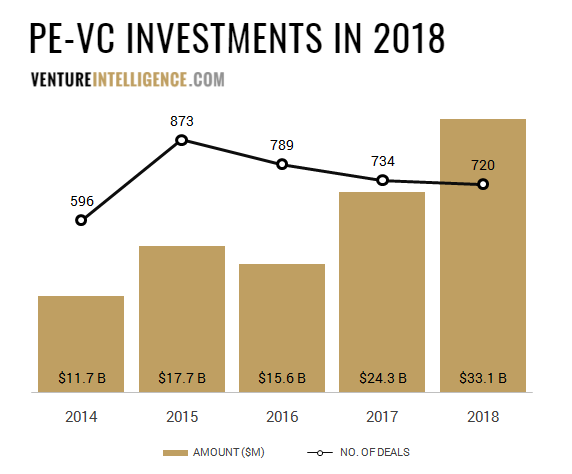 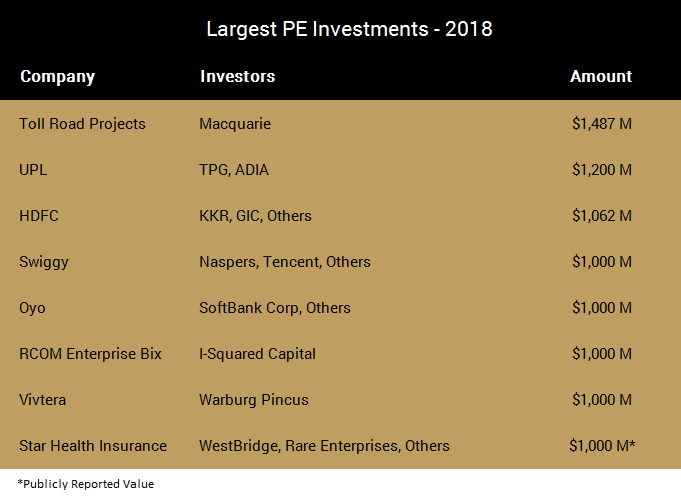 Led by the $1 Billion investment in Swiggy (from South Africa-based Naspers and others) and Oyo (led by SoftBank), IT & ITeS companies accounted for 32% of the PE investment pie in 2018 (attracting $10.6 Billion across 383 deals). Food delivery app maker Swiggy had started the year with a $100 million investment led by Naspers, followed it up with mid-year $210 million raise (co-led by Naspers and DST Global) and polished the year off with a $1 Billion investment (led by Naspers and Tencent). Hotel chain Oyo raised $800 million (with an additional commitment for $200 million) led by SoftBank Vision Fund. Paytm raised $445 million (from SoftBank and Alibaba for its E-commerce business, Paytm Mall) and $356 million from Berkshire Hathaway at the parent company (One 97 Communications) level.

Financials Services companies, led by the HDFC and Star Health Insurance, attracted 72 investments worth $5.9 Billion and included 17 deals of $100 million or more. The two Registrar and Transfer Agent business investments which had faced regulatory hurdles in 2017 – the Karvy - General Atlantic deal and the CAMS - Warburg Pincus one - were green signalled in the second half of 2018.

“The mid-year Walmart-Flipkart deal clearly re-energized international investors’ appetite for mega bets in Indian Internet & Mobile companies. This has helped offset the slowdown in investments in sectors like Financial Services, Manufacturing and Infrastructure towards the year end triggered by nervousness in the public markets and the IL&FS scare,” remarked Arun Natarajan, Founder of Venture Intelligence. “Whether the PE investment tally of 2019 can outdo the highs of 2018 seems set to hinge substantially on Global Economic trends in the new year and the outcome of the upcoming National Elections,” he added.