Private Equity firms invested about $4,046 million across 128 deals during the quarter ended June 2015, according to early data from Venture Intelligence . The investment amount was 80% higher than that invested in the same period last year ($2,242 million across 115 transactions) and 43% higher than the immediate previous quarter (which had witnessed $2,825 million being invested across 160 transactions). The latest figures take the total PE investments for 2015 to $6,871 M across 288 transactions (53% more than the $4,480 million across 252 transactions in the first six months of 2014). Note: All figures in this note are exclusive of PE investments in Real Estate.

There were as many as 11 PE investments worth $100 million or more (with seven over $200-M) during Q2’15 compared to four such transactions in the same period last year and seven during the immediate previous quarter, the Venture Intelligence analysis showed. The largest investment reported during Q2’15 was Baring Asia’s $440 million buyout of Blackstone-backed ATM cash management services firm CMS Infosystems, followed by Olacabs’ $400 million (INR 2,520 Cr) fund raise from a group of existing and new investors (including GIC, DST Global, Falcon Edge Capital and Accel USA). An over 20% stake in listed consumer lender Shriram City Union Finance changed hands from one PE investor to another (TPG Capital to Apax Partners) for $383 million (INR 2,456 Cr). The Advent International led $315 million (INR 2,000 Cr) buyout of a 34.4% stake in Crompton Greaves Consumer Electricals from its promoter Avantha Group was the next largest transaction during Q2’15.

Other companies that attracted over $200 million rounds during Q2 2015 included Sun Pharma (where Temasek stepped in to acquire the stake of Japan’s Daiichi for INR 1,875 Cr), Snapdeal (INR 1,563 Cr from investors in mobile recharge and couponing firm Freecharge - that Snapdeal acquired - including Sequoia Capital India, Valiant Capital, Ru-Net Holdings, Tybourne Capital and others) and Mankind Pharma (where Capital International acquired ChrysCapital’s 11% stake for INR 1,300 Cr). 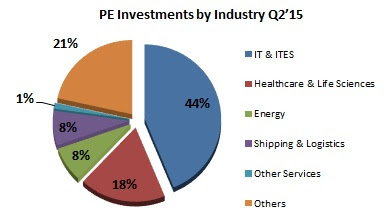 Late Stage companies (including mature companies like Mankind, thermal power firm OTPC India and TVS Logistics as well as Internet companies like Snapdeal and Quikr that have graduated to raising their seventh or later rounds) accounted for 24% of the investment pie in terms of value. Led by the Shriram City Union and Sun Pharma transactions, listed company investments (“PIPE” deals) accounted for 23% of the pie in value terms (while just 5% in volume terms). Led by the CMS and Crompton Greaves deals, Buyouts accounted for as much as 20% of the pie in terms of value (though constituting just 2% of the deal volume) in Q2’15, the Venture Intelligence data showed.

Venture Intelligence is the leading provider of data and analysis on Private Company Financials, Transactions (private equity, venture capital and M&A) & their Valuations in India. Click Here to Sign Up for the FREE Weekly Edition of the Deal Digest: India's First & Most Exhaustive Transactions Newsletter.