India executed its first bilateral investment treaty (BIT) in 1994 with the United Kingdom. The subsequent years witnessed a proliferation of BITs with several nations on account of the ‘liberalization wave’ that swept the country in the 90’s. Simply put, BITs were a bundle of protections that India promised to a foreign investor and which would have been extended to an Indian investment, in the counterparty’s country as well. However, given the intense inbound capital focus characteristic during the early liberalization period, these treaties acted more to provide a sense of security to a foreign investor coming into India as opposed to the other way around.

More than two decades down the line, India remains one of the more popular FDI destinations around the globe; however, outward FDI from India has also increased exponentially. Consequently, the BIT paradigm has changed as well-and-must now ensure that Indian investments outside India remain protected too. Through this note, we attempt to showcase India’s experience with BITs, investor state dispute settlement (ISDS) and certain pivotal aspects of the 2016 Model BIT.

Over the last few decades, several disputes have arisen with regards to BITs. Since India is not a party to the International Centre for Settlement of Investment Disputes Convention ICSID (ICSID), treaty disputes invoked against India are conducted under United Nations Commission on International Trade Law Rules (UNCITRALRules) and administered by the Permanent Court of Arbitration at the Hague (PCA). The government had released its Model BIT in the year 2015, on the basis of which it planned to negotiate any future BIT with another sovereign state. Additionally, the intent was to either renegotiate the existing treaties or execute joint interpretative statements in addition to the bilateral obligations. While the terminated BITs continue to hold good given the sunset clauses in each of them, the renegotiated BITs will only come into effect once the same are finally executed and ratified.Certain specific aspects of the Model BIT are analyzed in the following section.

The Model BIT extends protection to an “enterprise […] that has the characteristics of an investment such as the commitment of capital or other resources, certain duration, the expectation of gain and profit, the assumption of risk and a significance for the development of the [host State]” (Art. 1.4). This definition essentially takes note of the test applied to protected investments in Salini Costruttori S.p.A. and Italstrade S.p.A. v. Kingdom of Morocco14. While several arbitral tribunals have not followed the criteria laid down in Salini, the Model BIT has clearly placed reliance on the same and aims to restrict protection only to those investments which satisfy all the mentioned criteria.

The Model BIT also does not offer any protection over portfolio investments, loan or debt securities issued by the government, any pre-investment activities (including “any pre-operational expenditure […] before the commencement of substantial business operations […]”), money claims arising from trade in goods and services or from commercial transactions, goodwill/brand value/market share or similar intangible rights as well as a judgment or an award (Art. 1.4). For the avoidance of doubt, any “pre-investment activities” (Art. 2.2), matters of taxation (Art. 2.4(ii)) and services that are supplied by the government on a non-commercial basis (Art. 2.4(vi)) fall outside the scope of protection offered by the revised Model BIT.

While the Model BIT prohibits violations of customary international law that amount to a denial of justice, fundamental breach of due process, targeted discrimination and manifestly abusive treatment (Art. 3.1), it does not include a broader Fair and Equitable Standard (FET), a common feature in international investment arrangements.

The Model BIT does not implement a Most Favored Nation (MFN) clause, thus protecting against a foreign investor’s reliance on a more favorable regime of protection in place between India and a third party under another India BIT. Instead, the revised BIT relies on the National Treatment standard (Art. 4), which states that a foreign investor must not receive less favorable treatment than a domestic investor of the host State.

The Model BIT provides for an elaborate dispute resolution clause. The exhaustion of local remedies is thus a pre-condition for referral to arbitration (Article 15), except where the foreign investor can demonstrate that no local remedies capable of reasonably providing any relief are available. Following exhaustion of local remedies for a minimum period of 5 years, and a further cooling-off period of six months (Art. 15.2), the disputing parties may initiate arbitration by serving a notice of dispute. The initiation of arbitration is, however, subject to a number of strict additional conditions precedent, including the following:
A foreign investor that meets the conditions precedent has a choice to refer to arbitration under: 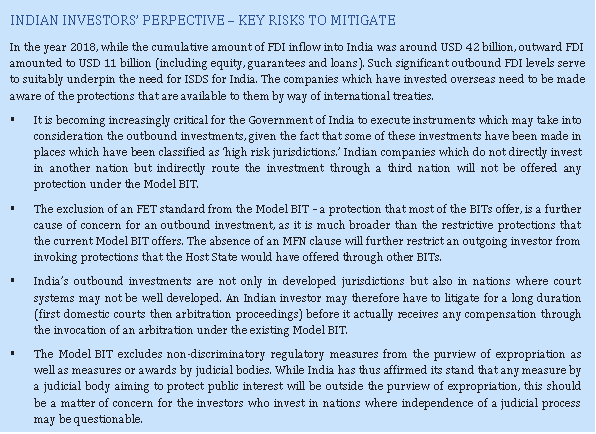 There is no doubt that India needs to leverage foreign capital to trigger its ambitious growth of being aUSD 10 trillion economy. Likewise, Indian investors are increasingly looking overseas to diversify their business, gain access to new markets, procure intellectual property and undertake research and development. BITs will increasingly be a part of the India growth narrative. Assuring foreign investors of a stable business environment in which their interests will be protected is as critical as safeguarding Indian investors capital overseas.

India may have a fair share of treaty arbitrations invoked against it, and the Model BIT too may have its naysayers, however the intention of equitable treatment on which the BIT system is rooted cannot be debated. India may have to rethink certain protectionist measures in its Model BIT going forward but at least we are headed in the right direction.