Scrutiny of the Online Hotel Booking Sector by the Competition Regulator

India’s e-commerce revenue is growing at an annual rate of 51% the highest in the world46.
A sector which has been part of this unprecedented growth is the online hospitality sector. According to a 2017 study, this sector is expected to grow to a USD 4 billion by economy 202047. However, growth always comes hand in hand with its own set of typical issues. Some of these issues have been raised before the Competition Commission of India (CCI), involving allegations against two key market players in the online hotel booking sector i.e. Oravel  Stays Private Limited (OYO) and MakeMyTrip India Pvt. Ltd. (MMT), under two separate complaints.

Broadly, all market participants in the online hotel booking sector such as OYO, MMT, Yatra.com and Fab Hotels, are in effect providing intermediary services/platforms to two different set of consumers viz., the hotels that use their services  to sell their rooms to the consumers and the ultimate consumers who use these platforms to book rooms at the partner hotels. This creates a dual sided market where the hotels as well as the ultimate consumers are availing the services  of  the intermediary platforms.

RKG HOSPITALITIES ALLEGING THAT OYO HAS ABUSED ITS DOMINANT POSITION

RKG Hospitalities Pvt. Ltd. (RKG), had alleged before the CCI that OYO abused its dominant position through its conduct. It was alleged that OYO had included and enforced terms and conditions in its agreement with RKG, which were one-sided, unfair and discriminatory. These practices allegedly included unilateral modification of structure of the hotel, disincentivizing hotels on the basis of performance, setting up exclusive signage of OYO on hotels and barring the hotel from engaging with other online aggregators. The CCI vide its prima facie opinion48 did not find OYO to be dominant, it however examined the allegations of abuses by OYO and concluded that the allegations were not made out.
The CCI, while determining the relevant market for assessing the conduct of OYO observed, that OYO provided services to hotels including:
- Access to identifiable brand recognition;
- Access to existing distribution channels; and
- Access to a compelling customer base.

Despite concluding that OYO was not a dominant in the relevant market, the CCI ventured into an assessment of the conduct complained   of   in   terms   of   Section   4    of the  Competition  Act,  2002  and   concluded that   that   allegations   of   abuse   of   dominance remained unsubstantiated.

FHRAI’S CONTENTION AGAINST MMT AND OYO

A subsequent information was filed by Federation of Hotels & Restaurant Association of India (FHRAI), before the CCI where it was alleged that MMT and OYO had collectively and separately abused their dominant position by indulging in predatory pricing, charging exorbitant commissions and by resorting to misrepresentations. Additionally, it was alleged that the MMT and OYO had entered into an agreement which had resulted in the exclusion of OYO’s competitors from listing on MMT. The CCI after reviewing the allegations, prima facie concluded49 that the allegations of abuse of dominance against MMT and allegation of anti-competitive agreement between MMT and OYO required investigation.
The CCI, in contrast to its earlier decision in the previous matter (described above), determined a broader relevant market in this matter. The CCI, based on the speci�ic features and types of services provided by the intermediary platforms, concluded that market players like MMT only acted as an aggregator of hotels for convenience of customers. It therefore determined the relevant market as market for “online intermediation services for booking of hotels in India”.
Relying on the investor presentations made by MMT and GoIbibo, the CCI observed that MMT held a 63% market share in the online intermediation market for booking of hotels. The CCI, while holding that the market share could not be the sole factor for assessment of dominance, concluded that prima facie MMT could be held to be in a dominant position in the relevant market. The CCI further attributed the long standing of MMT in the market for the above assessment.
In light of its prima facie determination, the CCI directed a detailed investigation into  the alleged conduct of MMT. Its prima facie observations while assessing the allegations were:
While MMT was considered to be in a dominant position, the CCI (consistent with its prima facie
findings in the previous case) did not find OYO to be dominant in the relevant market. The CCI noted that the market conditions did  not  appear to have changed since July 2019 to warrant a different delineation of relevant market.
It was also alleged that the agreement between MMT and OYO, which in effect led to exclusive listing of OYO hotels on MMT in exclusion of its competitors amounted to an anticompetitive agreement. The CCI prima facie concluded that these allegations required a detailed investigation to ascertain if effects of the commercial agreement had caused exclusion of OYO’s competitors from MMT’s platform. 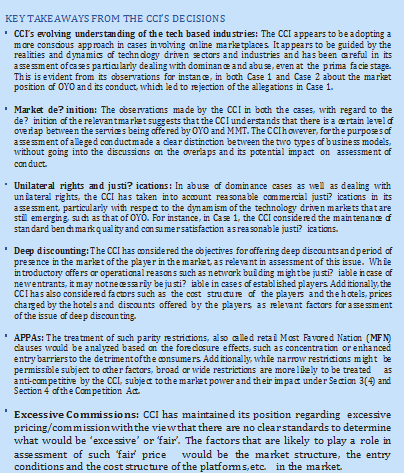 The market assessment of the online hotel  booking sector by CCI provides a useful (albeit limited) insight into the CCI’s current thought process on these issues in the context of technology driven sectors. Considering that these sectors are in their development phase in India and are being studied by the CCI separately,50 the outcome of a thorough investigation and inquiry is likely to throw light  on the approach that the CCI may adopt in the future and its likely impact on the competition  and consumers.