The top three legal advisors had advised investors and promoters in the $12 Billion exit from Flipkart. 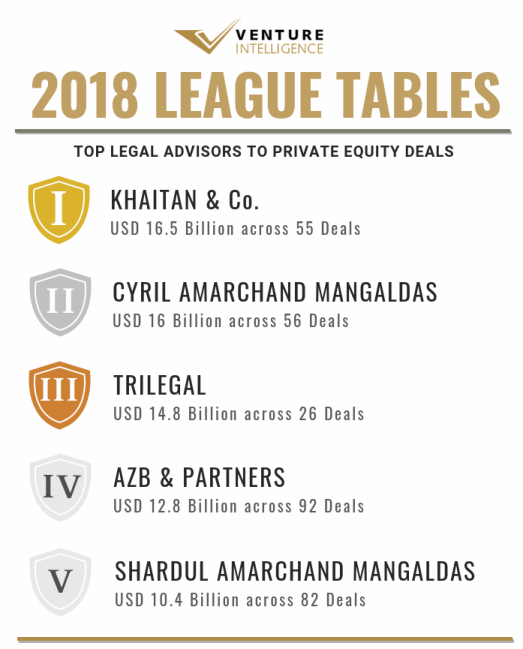 AZB topped the tables in terms of deal volume notching up 92 deals during the year, followed by SAM with 82 deals. CAM took the third place advising 56 deals. Khaitan and J. Sagar Associates (JSA, with 47 deals worth $5.3 Billion) occupied the fourth and fifth place respectively.

Among PE transactions in IT & ITeS (by value), Khaitan stood first followed by Trilegal and CAM. SAM and AZB came in at fourth and fifth. By deal volume, SAM stood at first place with 28 deals followed by Khaitan. Samvad Partners stood third with 23 deals followed by new entrant Anoma Legal (with 21 deals) and Novojuris, IndusLaw and CAM (with 20 deals) in fifth place.

HSA Advocates topped in Infrastructure deals with $2.7 Billion, followed by AZB and Bharucha & Partners. CAM came in fourth, followed by JSA in fifth place. AZB (with 13 deals) topped by deal volume, followed by SAM, CAM and Economic Laws Practice in second place with 5 deals each.

In Financial Services, AZB topped the table with $3.1 Billion, followed by SAM (with $2.2 Billion). Wadia Ghandy and Nishith Desai Associates (NDA) came in third place with $1.7 Billion followed by CAM (with $690 million). JSA took the fifth spot with $445 million.

SAM topped in Healthcare & Lifesciences advising deals worth $1.1 Billion, followed by Khaitan in second place and AZB in third place. NDA and Luthra & Luthra occupied the fourth and fifth place.

In Real Estate, AZB topped with $2.1 Billion, followed by JSA with $1.3 Billion. SAM occupied the third place followed by DV Associates and CAM. 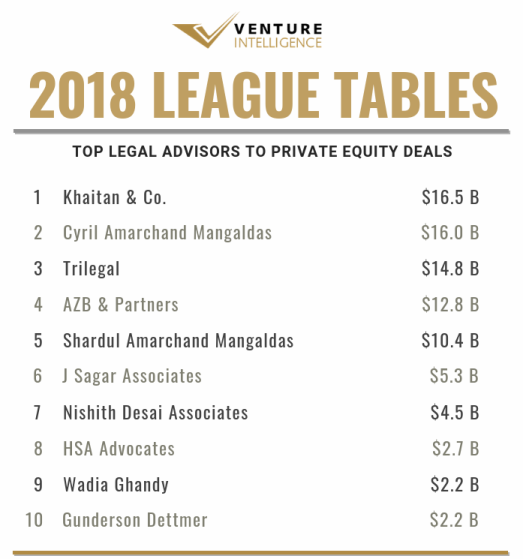 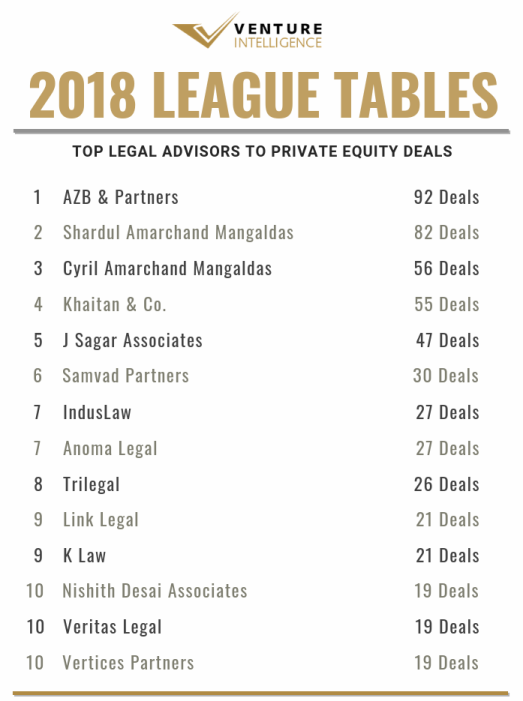 By Kotieswaran Raj December 31, 2022
Press Release: Private Equity - Venture Capital (PE-VC) firms investments in India fell by 29% in 2022 compared to the record highs of 2021. PE-VC firms invested $46 Billion (across 1,261 deals) in Indian companies in 2022, compared to $65 Billion (across 1,362 deals) in the previous year, reports  Venture Intelligence , a research service focused on private company financials, transactions, and their valuations. (Note: These figures include Venture Capital type investments, but exclude PE investments in Real Estate). India minted a total of 21 " Unicorn"  companies (VC-funded startups valued at $1 Billion or more) in 2022, 18 of them during the first six months of 2022 and less than half the 44 Unicorns minted in 2021. In fact, the final quarter of 2022 did not see any new unicorns being created. SaaS companies accounted for 29% of all the new unicorns in 2022,
Read more