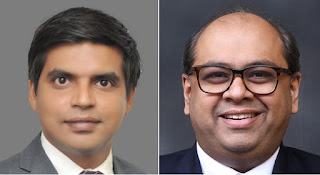 While the United States-China trade war has dominated the debate on global trade order and its future, there has been a silent and calibrated attack on India’s domestic policies at the WTO in recent years by several countries (such as the United States, Canada, Australia and Brazil). These countries have been questioning some of India’s export promotion schemes and domestic support measures for agricultural products such as rice, wheat, cotton, pulse and sugarcane and sugar before the WTO Committee on Agriculture (COA). 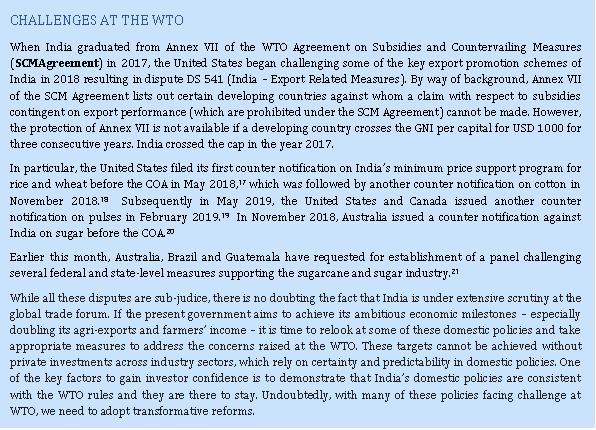 WHAT ARE THE KEY ISSUES?

These are also known as “amber box” subsidies. The developing countries that did not undertake any reduction commitments during the Uruguay Rounds of negotiation cannot exceed product-specific domestic support in excess of 10% of the value of the production of the basic agricultural product. Annex 3 of the AoA provides a formula to calculate market price support which is essentially calculated against a fixed external reference price that existed in the years 1986 to 1988. Most of the counter notifications issued against India contend that India’s market price support for products such as wheat, rice, cotton, sugarcane, are well beyond the 10% limit when compared to the fixed reference price prevailing in base years (i.e. 1986 to 1988).

WHAT COULD BE THE WAY FORWARD FOR THE GOVERNMENT?

While the jury is still out on the merits of the above concerns, India can take this opportunity to reform its domestic policies such that they are sustainable over the long term. In this regard, the government may consider:


However, exports under the schemes are repeatedly countervailed by foreign  countries on the grounds of lack of transparency in input-output norms and verification mechanisms. The government may consider remodeling its export schemes to the extent the same is allowed under Annex I and taking appropriate steps to make the input-output norms and verifications mechanisms objective and transparent.


These reforms are not easy given the social and political sensitivities around the medium, small and micro enterprises and agri-sector. However, in view of the concerns raised at the WTO, the government is looking at policy initiatives to reform some of its existing export subsidies and make them WTO-compliant.23 With the government pro-actively looking at change,  this  also may be the right time for businesses to initiate a dialogue with the government on their economic interests, concerns that they might have and the way forward.