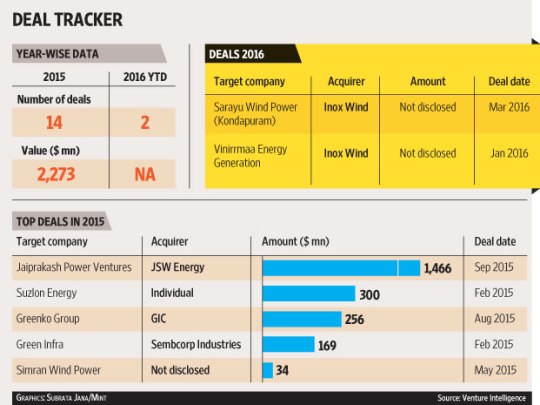 2. Opportunities for M&A exist in renewable project companies that were built in the in earlier waves of renewable energy development. (Want a Peek into the List? Try out our Cleantech Deals Database)

3. Large Companies are actively pursuing M&A route to scale up due to the long time scale required for pre-development work, such as in wind, or the uncertainties of competitive bidding in solar (e.g. solar bids routinely attracting 60-70 bidders). M&A guarantees scaling-up in a manner that green-field development cannot.

While  the above factors have been given as reason for further consolidation, Rahul Mody, Ambit Corporate Finance and Kameswara Rao, PWC opine that the consolidation in the sector could be a short lived one due to

1. Limited number of renewable assets in the market

2. With the Indian Government's ambitious target to generate 320 GW through renewable energy sources by 2030, the market is attracting a large number of new players - meaning the market is in fact becoming broader rather than consolidating

By Ashok - Venture Intelligence March 21, 2021
COVID-19: Turning Point for Online Pharma With the rapid advancement of the internet and movement of businesses online, it was only time before the pharmaceutical retail industry also joined the bandwagon. The pharmaceutical retail industry which has long been popular among investors also started to venture into providing online services ( Online Pharma ). This was due to the increased demand and tech-savvy clientele who preferred to order from the comfort of their homes. So, it was only natural that the Online Pharma sector bloomed during the Covid-19 pandemic and the ensuing lockdown.  Online Pharma is high in demand due to better discounts, convenience, greater anonymity, accessibility in remote locations, easy home delivery, etc. These features have made it the preferable option over community brick and mortar pharmacies during the pandemic. This article explores the current regulatory regime surrounding Online Pharma and the opportunities in India that it presents for investors. O
Read more