By Arun June 06, 2016
Data from Venture Intelligence's VC Database shows the month of May was the most brisk month for Venture Capital so far in 2016 - with investors making as many as 45 investments worth $300 million (including Growth Capital investments in IT & ITES companies of more than $20-M).

While the value of the tech deals was less than the peak in January (when companies like CarTrade and ShopClues had attracted $145 million and $100 million respectively), the month saw companies like Stayzilla, Crown-it and Mobikwik attract significant follow-on funding.

While Series A investments continued to be slow, specialized seed funds including Blume Ventures and YourNest Angel Fund as well as Kalaari Capital, which backed three companies as part of its seed investment program Kstart, were especially active.

Angel investments also slowed down during May to 33 deals when compared to the peak of 49 in February. 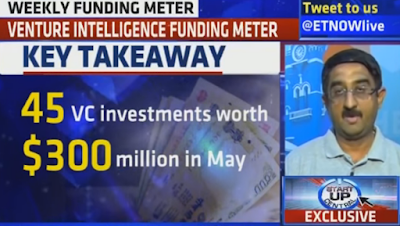 Venture Intelligence is India's longest serving provider of data and analysis on Private Company Financials, Transactions (private equity, venture capital and M&A) & their Valuations in India. Click Here to Sign Up for the FREE Weekly Edition of the Deal Digest: India's First & Most Exhaustive Transactions Newsletter.