By VarathaVC June 30, 2016
Venture Capital firms made 94 investments worth $324 million in Indian companies during the three months ending June 2016. The investment activity in Q2’16 is 16% lower compared to the same period in 2015 (which witnessed 112 investments worth $491 million), according to analysis by Venture Intelligence. The activity level was also 9% lower compared to the immediate previous quarter (which witnessed 103 deals worth $299 million). 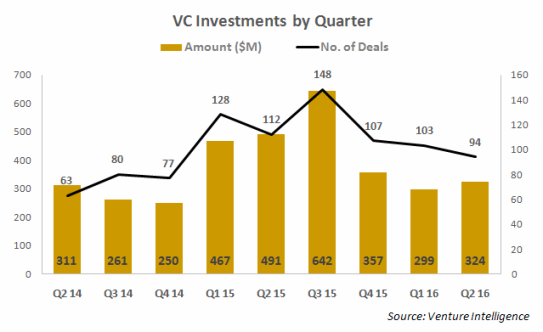 VC investments during Q2’16 were led by fashion e-tailer Voonik which raised a $20 million second round led by existing investor Sequoia Capital India, followed by the $16 million third round investment in playschool company KLAY Schools (led by Peepul Capital with participation from existing investor Kaizen PE). Other start-ups that attracted significant capital during Q2’16 included healthcare products e-talier 1MG (that raised a $15 million second round from Sequoia Capital India, Maverick Capital and Omidyar Network) and online tax filing company Cleartax (that attracted $12 million from SAIF Partners, following a $2 million round from Sequoia Capital India and US-based Founders Fund).  (Note: As VC type investments cap out at $20 million per round under Venture Intelligence definitions, follow on investments raised by companies like NestAway, Helpshift, etc. are not included in this analysis.)

Information Technology and IT-Enabled Services (IT & ITES) companies, at 73 deals worth $223 million, attracted 78% of the VC investments (69% in value terms). Healthcare & Life Sciences companies followed a distant second attracting 6 investments worth $25 million. IT & ITES investments during the latest quarter were however down from the 81 deals recorded in Q2 2015 and 77 deals in Q1 2016.