By VarathaVC June 30, 2016
Sovereign Wealth & Buyout Funds Step Up Activity even as Mega Deals dry up for Internet & Mobile Cos 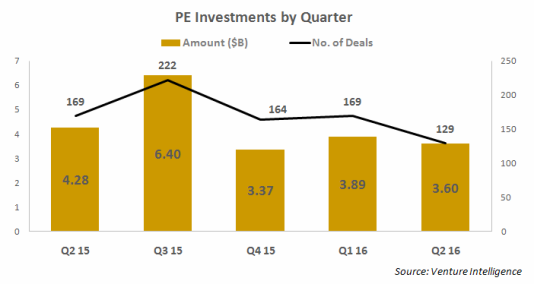 Only six PE investments worth $100 million or more were reported during Q2’16 compared to 11 such transactions in the same period last year and 12 during the immediate previous quarter, the Venture Intelligence analysis showed. The largest PE investment announced during Q2’16 was Blackstone’s $1.1 billion buyout of the majority stake held by US-based Hewlett Packard Enterprise in IT Services & BPO firm MphasiS, which triggered an open offer to public shareholders of the target company.

“Mega deals in the Internet & Mobile companies were noticeable by their absence in the latest quarter – even compared to the immediate previous quarter when companies like BigBasket, CarTrade and ShopClues had attracted investments of over $100 million each,” noted Arun Natarajan, Founder of Venture Intelligence. “Despite the cooling off in Internet & Mobile sectors as well as more recent international developments like Brexit, etc, the increasing commitments being made by truly long term investors like Sovereign Wealth Funds, Pension Funds and Buyout funds portends well for the second half of the year,” he added. 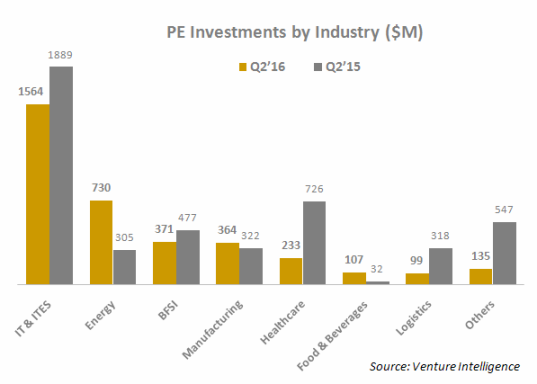 Led by the MphasiS and Fractal Analytics deals, IT & ITES companies accounted for 43% of the PE investment pie in Q2’16 attracting $1,564 million across 86 transactions. However, despite the blockbuster MphasiS transaction, the value of IT & ITES investments in Q2’16 was down 17% from the $1,889 million across 101 deals in the same period in 2015 (which had witnessed massive investments in Internet & Mobile companies led by Ola, Snapdeal and Quikr). 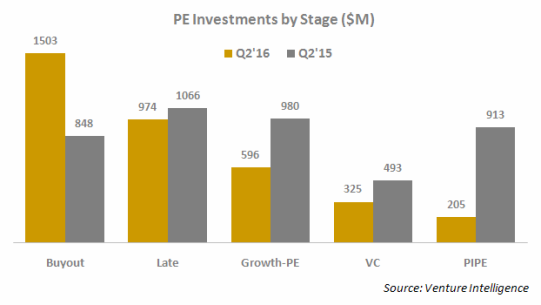