By Ananth Narayanan April 19, 2021
Portfolio has several overlaps with other big investors; makes repeat investments in select sectors such as Edtech and Fintech
Known for its aggressive take on the Indian startup space, this this US-headquartered investors - with roots in the hedge fund world - has been hitting the headlines repeatedly this year with its participation in consecutive Mega funding rounds ($100M+ deals). The investee companies are typically big names in the country's startup ecosystem.
Flashback
Five years ago, when Venture Intelligence had analysed Tiger Global’s rising impact on Startup India (including an infographic depicting the overlap of Tiger's portfolio with other active investors during that period), the firm’s VC-type investments had been led by Lee Fixel.
After closing 37 deals in 2015, Tiger Global went into a 'Slowdown Phase' between 2016 and 2018, when it invested around $250 million across just 22 deals and began to focus on cashing out from its earlier bets.
The mega exit from Flipkart - via the $16 Billion acquisition by Walmart in mid-2018 - left Tiger with an estimated 5x return on its about $1 Billion “make or break” bet on the e-commerce startup (starting in 2009). Its partial exits of $300 million from Ola Cabs in December 2017 and  $150 million from PolicyBazaar in November 2019 were some of the notable exits during this period.
After cementing his track record (including through the Flipkart exit), Fixel quit Tiger in early 2019 (to start his own firm). Scott Shleifer took over the reins from Fixel and has since then, steered 53 investment deals in India (as of mid-April 2021), infusing around $1.7 Billion.
Under Scott Shleifer, Tiger has paid more attention to B2B startups, with  30% of its new investments going into Enterprise Software startups. Its newer B2C bets include Grofers (May 2019), Ninjacart (April 2019), Urban Company (August 2019), NoBroker (October 2019) and Upstox (September 2019).
Tiger’s Hunt for Unicorns
Tiger Global currently boasts around 17 Unicorns in its India portfolio, one more than Sequoia Capital - with 8 of them being common portfolio companies. Five of them - Byju's, CRED, Unacademy, Zomato, and  Groww - were backed at an early stage by Sequoia. Other Unicorn startups shared by these firms include payment firm Razorpay; ride aggregator Ola; food delivery firm Zomato and SaaS star Freshworks. 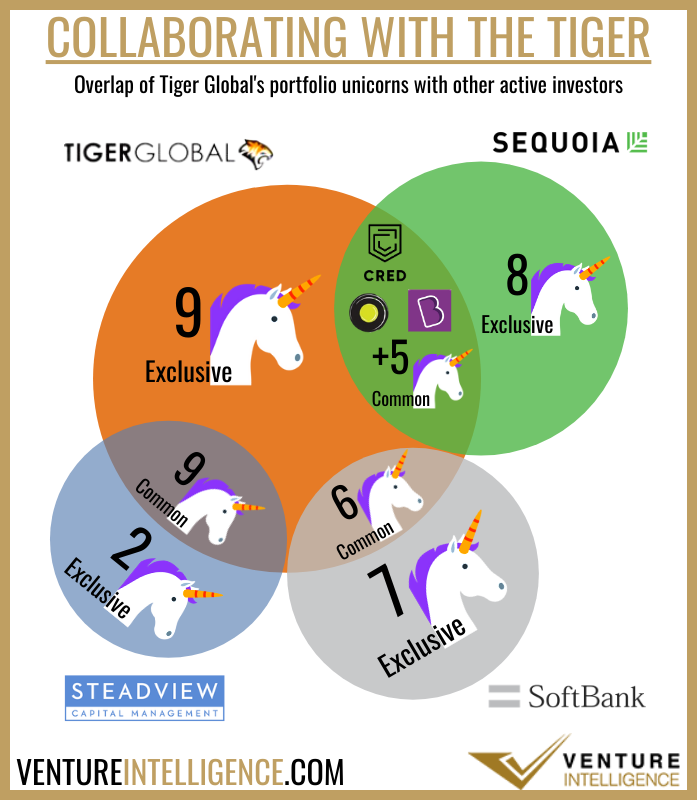 Interestingly, Tiger spreads its bets among several promising startups within the same sector. For instance, it enjoys a stake in three of India's top Edtech startups: Byju's, Unacademy, and Vedantu. Similarly, it has backed Groww, IndWealth, and Upstox in Fintech.

The Roar in 2021
Flush with new capital (Tiger’s latest $6.65 Billion 13th fund, which follows just a year after the close of its 12th fund at $3.75 Billion), the firm has begun the year with a scorching pace of investments: closing 11 deals by mid-April, 10 of them in Unicorns. It has been a part of seven Mega rounds ($100M+ deals), the latest being its $100 Million bet in Beerud Sheth-founded messaging company Gupshup.
Wondering where all this data on Unicorns - whether from Tiger’s stable or otherwise? It’s all galloping from the Venture Intelligence Private Equity Deals Database - India’s Longest Serving and Most Reliable Source of Data on PE-VC Transactions. Rich with Valuation Metrics, Return Multiples, and Other Deal Data - going back to 1998!
Head on over and explore various interesting facts relating to the Unicorns and other high growth startups, including:
For digging up more on Tiger Global, existing subscribers of the Venture Intelligence PE-VC Deals Database can click on this direct link (after logging in) or login first and then click on the “Directory” tab to search for “Tiger Global”.
New to the database? Click Here to request a Trial to Venture Intelligence Products.
On the back of aggressive bets by Tiger, SoftBank, and other investors, the Indian Startup Ecosystem - the 3rd largest in the world - had attracted about $4.4 Billion worth of funds in the first quarter of 2021. April has however brought a new set of challenges to the Indian economy - including renewed travel restrictions and lockdowns following a massive second wave of Covid-19.
Will this affect the torrid investment pace - on the back of the boom in Digital adoption - spearheaded by Tiger? Or will it force the uber investor to change its stripes, yet again?
You can rely on Venture Intelligence products - including our Daily Deal alerts - to stay ahead of the curve.
About Venture Intelligence
Venture Intelligence is India's longest serving provider of data and analysis on Private Company Financials, Transactions (private equity, venture capital and M&A) & their Valuations in India.